When you add in the materia system, which encourages you to break down your gear to turn it into materia, incentivizing you to seek out new stuff, it keeps the whole in-game economy flowing much better by not allowing rare items to rest exclusively in the hands of a ruling class. 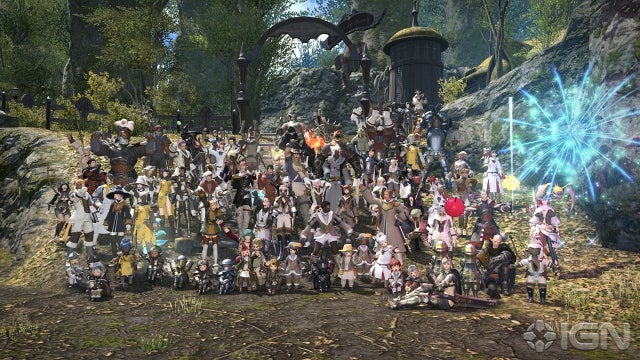 If you’re in an area that has trees or grasses to harvest, you’ll see four or five nodes on your mini map. As soon as you empty one node, another will pop up. I’ve never seen fewer than two, no matter how fast I work. You can’t run out.

You go out and find some trees or plants and start harvesting the nodes you find. Another player runs up and starts harvesting the same node you’re working. How does this affect you? Not one bit. The nodes are instanced. You get your own private nodes to harvest. The player next to you, working the exact same spot, is working his own private node that has nothing to do with yours.

Bear in mind, this is pissing a lot of people off. Mostly the people that are used to shortcutting by lurking near nodes, playing at odd hours, and just in general trying to slip the system beyond what was really intended.

Maybe I’m spoiled from Xenoblade and only having to answer to myself, but questing should be simple. They tell me to go kill ten of something, I do so, I get a reward, and a new assignment until my brain seizes up. That’s pretty much the basis of the whole system.

We are leading of FFXIV Power Leveling and FFXIV Gil provider.

The more elite “hardcore” gamers don’t like that because it was the artificial scarcity they manipulated that allowed them to hog the best gear that others couldn’t really hope to ever get because no matter how good you get at a game you’ll never be better than someone who has unlimited time to work around the edges.

I’m not sure I’ll ever be much of a MMORPG player, but I’ll say this for Final Fantasy XIV… I have never seen a game go so out of it’s way to make a player feel like they could really accomplish anything in-world.

← FFXIV Being a piece of the puzzle Final Fantasy XIV scholarly →