Of particular interest to me in these patch notes are things like removing the rating requirement from all PVP items, the Basic Gear vendors on fleet selling Makeb rep items, and Achievements for boss kills crediting correctly for people in the group.  One of the biggest bugfixes that affects my daily SWTOR life is the Quick Travel terminals listed in the first line item.  That had been driving me utterly batty since that bug started.  Batty, get it?  (Hey, if they can get away with the TRK-R Treatment Chamber pun, I’m running with my batty one!) 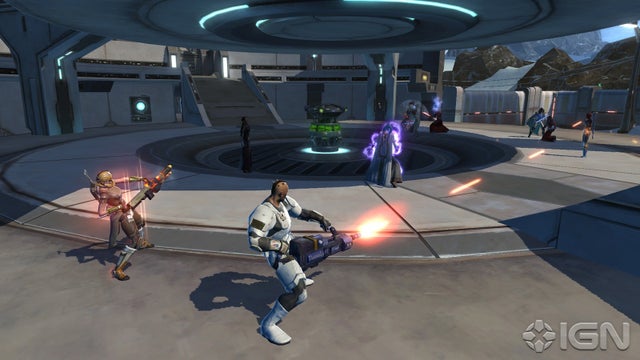 In more serious news, the Cartel Market section of the notes also mention a trio of dyes available for either 1000 or 600 cartel coins, and while players were eager to see the black/black and white/white to reappear, the black/white and white/black often go for a lot on the Galactic Trade Network, so this is a good tradeoff.  Although, given the holiday season, it would have been nice to see more Halloween-colored dyes out there.  The orange/green and black/orange are nice dyes already out there, but only as random drops from cartel packs.

The only thing that made me arch a brow in the patch notes was the note about a major Consular story quest that was bugged.  I understand the need to advise that the bug was fixed, and the minefield that is trying to do so without spoiling the plot (which some folks have already commented unhappily about on the forums).  However, as much as I would have liked to have avoided the spoiler myself because I haven’t gotten that far in the story on any of my Consular characters, I have to also acknowledge that it’s nearly two years since launch.  It would be like an acquaintance of mine throwing a tantrum because someone talked about Dumbledore’s death right before seeing Harry Potter and the Half-Blood Prince… when the book version had been out for three years already at the time of the complaint.  It’s not the other person’s fault he didn’t read the book.